Why do chickens peck holes in their eggs?

Chickens pecking holes in their eggs might at first seem like an innocent action by a curious creature, they are natural foragers and will, therefore, peck at a range of items out of curiosity and also in the search for food.

If you notice any small holes in the egg then this is a serious sign that you need to look into to find out whether or not the chicken is pecking holes in their eggs.

Chickens peck holes in their eggs initially out of curiosity or boredom but this could also be out of hunger. A freshly laid egg with a soft and vulnerable shell can easily be broken and if the chicken is pecking due to hunger, then this can lead to the chicken developing an egg-eating habit.

An egg-eating habit is a serious issue for anyone keeping a flock and therefore you need to be aware of why chickens peck their eggs, what the signs are and more importantly, how to prevent it.

Why Do Chickens Peck Holes in Their Eggs

If you notice a few holes in your chicken eggs then this could be a serious issue that you’ll need to look into. Small holes could be something innocent like the chickens accidentally stepping on them when moving around the nest, in which case rearranging the layout of the nest would quickly show whether or not this is the case.

If however, the holes are the result of pecking then this is behavior that will quickly need to be rectified before it becomes a habit which would lead to egg eating (a serious issue in your flock).

In general, chickens will peck at eggs mainly out of curiosity or boredom. They are foraging animals and therefore peck at a variety of items in a hunt for food.

This can be expected and is a completely natural behavior, for the most part, a chicken won’t peck at an egg that they’ve laid as that is unnatural behavior for them. There are theories, however, that a chicken will peck at the egg in an effort to test the strength of the shell to determine the possible health during the hatching process.

Another common reason that chickens will peck at their eggs is that the chickens are low in calcium so are pecking the eggshell for the calcium-rich content. This is something that can easily be rectified and prevented by ensuring their diet is optimal and has sufficient calcium and also protein in order to prevent hunger.

Finally, a chicken will peck holes in their eggs to eat them. This is by far the biggest issue of egg pecking and if the habit spreads throughout the flock then you’ll find you have a monumental task to break this habit.

If a chicken stumbles upon the taste of the egg then it will go out in search of more eggs as an easy (and tasty) source of food. If other chickens follow suit and pick up on this habit then you’ll have a very serious issue in your flock.

In summary, chickens can peck their eggs for any of the following reasons:

If you are unsure of what the reason for pecking is then you need to start to take steps to prevent this and rectify the issue.

How to Stop Chickens Pecking Holes in Their Eggs

Breaking the habit of chickens pecking holes in their eggs can be very difficult, especially if this has led to egg eating and therefore your first action should be prevention.

This can be done with regular/frequent egg collecting which won’t give the chickens enough time to peck holes. The longer the eggs are left in the nest, the more likely it is that a chicken will eventually peck at them so quick removal is the easiest solution.

If you don’t have time for regular collections then a sloped nesting box is going to be your next best option. This will allow the laid eggs to roll away from the chicken into an isolated location that should be safe from pecking.

While these are the basic preventative measures, you’ll also want to implement some of the following measures if you find your chickens are pecking (or worse, eating) their eggs.

Breaking the eggshell without the shell membrane is a clear sign that your chickens are searching out sources of calcium rather than eating the contents of the egg. If however, they go from breaking the shell to discovering the food source inside then you have an issue so preventing a calcium deficiency is key.

Supplementing your chicken’s diet with a hard oyster shell that’s broken up into small pieces (so that it doesn’t actually resemble an egg) is the simplest and most common source of increasing the calcium content in your chicken’s diet.

You can also use a regular chicken’s crushed eggshell though again make sure it’s crushed up fine enough to not resemble an egg.

If your chickens have somehow got into the habit of eating the egg then preventative measures need to be taken in order to discourage and deter this behavior.

Fake eggs or golf balls placed in the nest are common ways of giving the chickens the impression that it’s not worth their time or effort to try and peck into the eggs given the struggle of trying to pierce through the decoy egg. 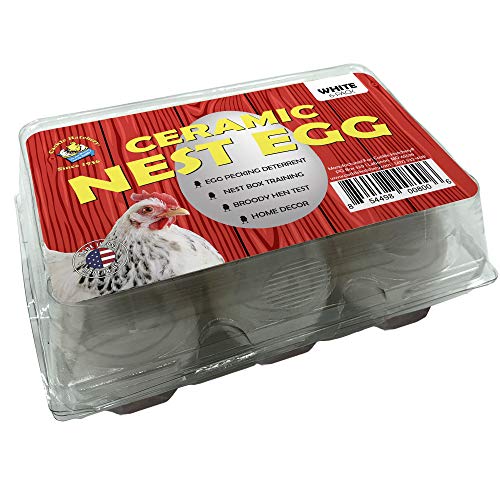 Some people also coat some eggs with petroleum jelly so that when the chicken attempts to peck through they will be presented with a beak full of unpleasant jelly which again acts as a negative association with pecking through eggs for food.

There are a few reasons that chickens peck at their eggs, curiosity, a calcium deficiency, a protein deficiency or worst-case scenario, they’ve got a taste for the egg white inside and have developed a habit of eating their own eggs.

Egg pecking is a serious issue that can quickly spread in a flock and therefore prevention should always be a focus. A regular egg collecting schedule (early morning), identifying the main culprit in the flock and putting deterrents in place should be your focus to ensure that any egg pecking doesn’t lead to egg eating!

This website has been created to help anyone thinking of buying a small pet or anyone needing some advice for their current pet. We have assembled a very experienced team of authors from within the pet industry. Some are vets, we also have some pet breeders and others are experienced pet owners.