How long do hamsters live? Hamsters are small and cute little animals that are great fun for young and old. There are 19 species of hamsters in the world, but only about 4 or 5 can be adopted as pets.

Unfortunately, the life expectancy of a hamster is not high.

The general genetics, over breeding, and housing conditions determine the lifespan of a hamster in individual cases. It is therefore impossible to say exactly how old your hamster can get.

Hamsters life expectancy varies from breed to breed. As a rule of thumb, the bigger the animals, the older they can get. However, the age range between the different hamster breeds is not exactly large. Dwarf hamsters, for example, live 1.5 to 2 years, whereas medium-sized hamsters can live up to 3 years.

But why is the general hamster life expectancy so low?

There are two main reasons for this: First, because of their very small size, hamsters have a much higher metabolism in relation to their body mass than larger animals.

Their hearts beat up to 500 times per minute.

For comparison: In humans, the heart rate is between 60 and 90 beats per minute.

This extremely fast metabolism means that the organs also wear out faster and thus show signs of aging early.

On the other hand, the survival strategy of the species is not that individuals survive for a long time.

In the wild, hamsters are confronted with all kinds of predators.

Their strategy – like that of mice and all other small rodents – should, therefore, multiply quickly to compensate for the high losses caused by being eaten.

Hamsters are sexually mature at just a few weeks and can then have up to 8 litters a year after a very short gestation period of around 18 days.

Genetically, a high hamster life expectancy is not necessary as long as the hamsters can ensure the survival of their breed through high birth rates.

Most hamsters are in their prime life just before reaching one year of age.

Although this may depend on the life expectancy of the particular breed, at this age, they have a lot of energy and be playful.

From the age of 12 to 14 months, female hamsters can become sterile.

Even if this doesn’t happen, if a female hamster hasn’t bred before this point, then it’s too late.

Breeding after this age can lead to problems in the pelvic and hip areas.

Let us take a look at the different species of hamsters and how their lifespan can vary from breed to breed.

The life expectancy of the golden hamster or Syrian hamster

In individual cases, golden hamsters live longer, but it is not uncommon for hamster families with young ones to die after 20-24 months (i.e. after about two years).

As much as hamsters bring joy to both children and adults, keeping them means a great deal of stress for the animal, which is then reflected in a lower life expectancy.

What’s the life expectancy of a Russian hamster

On average, the adults of the Russian hamster are 8–10 cm long, while a golden hamster can even reach 13-18 cm in length.

The life of a Russian hamster is less than other types of hamsters.

Compared to golden hamsters, for example, the life expectancy of the Russian hamster is about 5 to 6 months lower.

According to these data, one might think that the bigger a hamster is the longer its life expectancy, but this is not the case.

Russian hamster is classified as a dwarf hamster because of its small size roughly equivalent to that of a mouse.

It has a grey tone, with stripes on the back which make it a delightful little animal.

Being very active, it needs a large cage to enable it to run, play, and dig. It is, therefore, necessary to provide it with an abundant litter in which it hides.

What’s the life expectancy of a Chinese hamster?

They are really small and are very affectionate with their families.

What’s the life expectancy of a Roborovski Hamster?

This hamster, also dwarf, does not like to be handled too much.

It is a pretty rodent interesting to keep and see it grow. It is the smallest species of hamster (about 5 cm) and is extremely lively and fast.

It tends to escape easily into the house if it escapes the hands of its owner! It is therefore not the most recommended species for young children, as it can also bite if it is stressed or mistreated.

What’s the life expectancy of the Campbell hamster

The lifespan of a Campbell hamster is between 1.5 and 3 years. It is often confused with the Russian hamster, but it is a bit shy and reserved. They are of varied colours.

Typical signs of ageing in hamsters

Every living being gets old once. Hamsters are no exception. With the low hamster life expectancy, typical signs of ageing appear early.

The first sign of progressive aging of a hamster is shown on the fur. It becomes lighter, dull, and shaggy.

Extensive grooming becomes more difficult for the hamster with increasing age. Its joints are badly worn and can slowly stiffen and even hurt.

Gentle postures, a crooked backbone, and an emaciated body are also part of widespread physical changes in old age.

Like most old animals, the aging hamster sleeps more and is less keen to move. It generally gets calmer.

Running and climbing are no longer its favorite pastimes. The appetite is also reduced in old age.

Bladder and kidney problems become more common, and age-related diabetes is also common in hamsters. With the lightening fur, the first age spots appear on the skin.

The entire immune system degrades more and more. Therefore, an aging hamster is generally much more susceptible to disease than its young counterparts.

But even before the first signs of aging appear, the hamster can suffer from various diseases.

Poor husbandry or delayed illnesses from the breeder can be very hard on the small rodent even at a young age.

Almost all hamsters that are kept as pets are targeted breeds. As a result, however, sometimes severe, gender effects creep in.

This is especially the case with overbreeding through incest.

Cardiovascular diseases, diabetes, ulcers, and tumors can be the result of this overgrowth. Hamsters affected by this usually don’t get very old even in the best living conditions.

The average life expectancy of a hamster is therefore not very high. Nevertheless, you can give your hamster a wonderful life for a short time. However, you must be clear from the start that your little rodent will only accompany you for a very short time.

What influences the maximum attainable age of hamsters?

The life expectancy of a hamster naturally depends on other factors. In addition to a healthy diet, it is of primary importance that the animal is kept alone.

Unlike rabbits, for example, hamsters no longer want a partner by their side at the latest when they reach sexual maturity.

Territorial fights are the result, whereby at least one of the hamsters would not survive the fight. Besides, the hamster must find a natural environment in its cage.

Sufficient exercise is just as important as the daily rest.

Hamsters are known to be nocturnal and rarely get up before 10 p.m. If hamster nibbles on the cage in the evening, then this is by no means normal.

The animal does not feel comfortable in its territory and suffers from stress.

Too little exercise leads to long-term stress, which sooner or later shortens the life of the hamster. A happy hamster makes itself felt by digging in the litter – but not by nibbling on the cage.

Talk to your veterinarian about what measures are especially useful for your senior hamster. Often things have to be changed regarding the hamster cage.

For example, the risk of injury should be minimized: higher cages are dangerous because older hamsters can fluctuate a lot and then fall.

Lattice bars that are too narrow are also not ideal since a senior rodent could get tangled in them.

The grid spacing should be one centimeter for hamsters. Also, make sure that the hamster can easily get food and water – is the water dispenser possibly too high for the old hamsters?

If you have a cage with several floors, move all the important items down, as old hamsters often only rummage around on the ground floor.

How can to prolong the life of a hamster?

The living conditions of a hamster are very important and have a great influence on its longevity. However, beyond the years, the most important thing is that they are happy. Find out below the ideal care to increase how long a hamster lives!

For your hamster to be fine, it must be fed properly!

Buy specific feeds for this type of rodent and also feed it with snacks.

Also, you can supplement your diet with fruits, grains, vegetables, and seeds.

Pay attention to slicing large pieces of food and avoid leaving leftovers in the cage.

Give hamsters a variety of vegetables, but not the same kind of vegetables. Also, provide clean water every day.

Do you think hamsters can eat bread? Find out here!

The place where a hamster lives is very important. Even if it is a small animal, the cage must be large enough for it to be comfortable and run from side to side.

Also, you must have toys with which you can fight boredom and wheels to be able to exercise.

The cage must be located in a quiet area, where the hamster can rest without any worries. You should try to make your hamster stress as little as possible, as this also influences his average life expectancy. 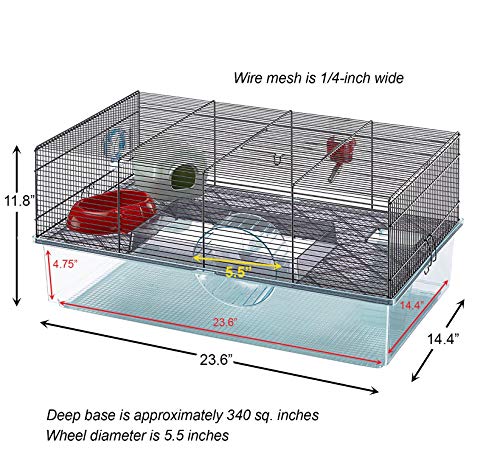 The hamster cage should be cleaned once or twice a week, as well as changing the lining and sawdust. Wash it with mild soap and water.

To clean the pet, opt for a dry bath. Also, try to get it out of the cage from time to time so that it walks around the house.

Some species of hamsters are nocturnal, that is, more active during the night, from approximately six o’clock in the evening.

If you try to wake it up in the morning, the pet may become stressed, decreasing its quality of life. Do not interrupt your hamster’s rest while sleeping during the day.

Keeping your rodent’s cage clean is critical to its health. Take a few minutes each day to check it and remove the faeces if necessary, and do a thorough cleaning once a week.

Change the bed and clean its feeders.

Many hamsters never go to a vet. It takes at least once a year to have a follow-up. This can help prevent the detection of possible illnesses or health problems.

Since the life cycle of hamsters is very short, old age begins when the rodent is one year old.

From that moment on, they are more likely to suffer from diseases – which, if treated in time, can be cured – and that is why it is essential to take him to the veterinarian periodically.

Conclusion: How long do Hamsters Live?

This may be achieved by ensuring that your pet is fed properly, kept in a safe, clean, spacious environment as well as being taken to veterinary care when needed.

By following these precautions, your hamster will have a long and happy life. Can Rabbits Eat Grass? Is wet grass ok to feed them!