25 Amazing Macaw Facts | Some even shocked us! 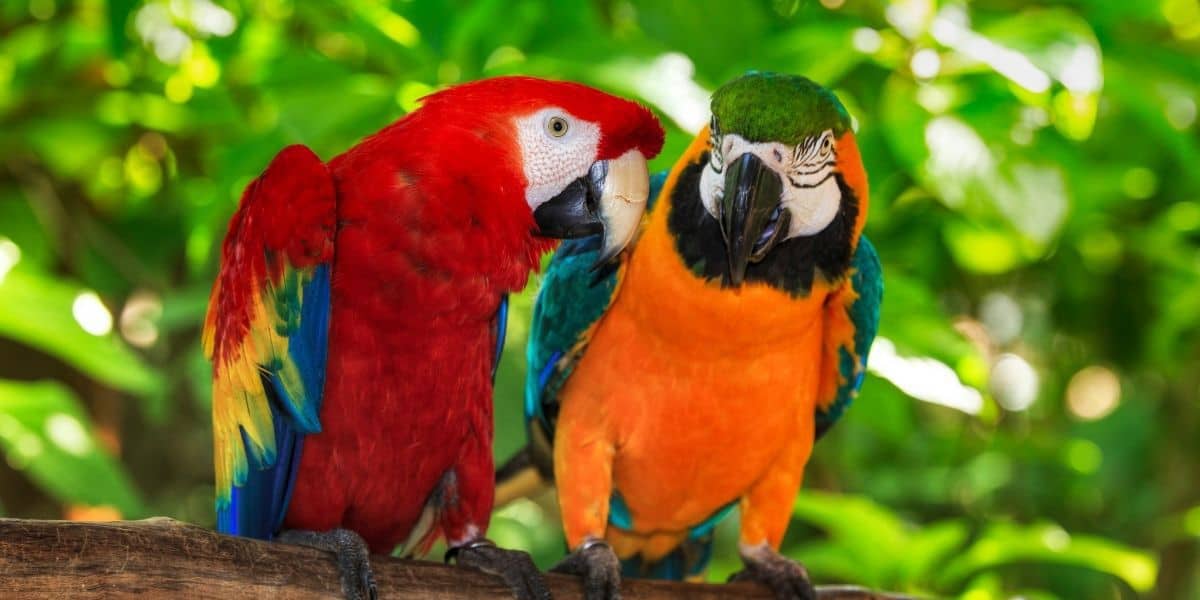 The Macaw, a popular species of New World Parrot (a group of around 150 species of parrots that are found in South America, Central America, Mexico and the Caribbean) is a colorful bird both in appearance and personality and makes an awesome pet for bird lovers of all kinds.

They are not only an extremely interesting wild animal from the rainforests of central and south America but also a fantastic domesticated pet bird for any household, as long as they are taken care of properly and handled with care.

There are many fun and generally unknown facts about this fantastic species of parrot, so read on to find out what makes your Macaw special!

Here are some Macaw Facts that you might not know.

25. They take one mate for life

Macaw parrots, much like some humans and a surprising amount of other animals, only take one mate their whole life. The couple will Preen each other as well as their young, cleaning them and clearing their feathers of bugs and debris.  They must be the romantic type!

Macaw parrots are excellent parents! A female macaw normally lays 2-4 eggs, after which the mother parrot sits on the eggs to incubate them while the father finds food for the entire family.

The macaw chicks are born with no feathers and closed eyes and are taken care of very closely for about 1 year until they are mature and ready to be on their own.

23. One of the largest parrot species

Amongst all of the different species of parrots on earth, Macaws are the largest. They weigh on average between two and four pounds, or about two kilograms.

They can have a wingspan of up to 127 centimeters, or 50 inches! There are also smaller species of macaw, which can be as small as only one foot in height!

22. Macaws are known to be diurnal

Their sleep patterns are like humans. They are diurnal. This means that like you, they sleep throughout the night when the sun is down, and wake up in the morning when the sun is up.

Make sure your Macaw is situated somewhere where the sun’s rays can reach it! This will allow it to have a healthy sleep cycle by waking up when it is naturally supposed to.

21. Their tongue has a strong bone

Macaws have a bone in their tongue, which is also hard and scaly, specifically designed for getting the most out of fruits it eats.

It can bore into fruits, vegetation, and other foods with its beak and sharp tongue to extract the nutrients it needs.

Make sure to feed your Macaw a proper diet with many fruits, they love it!

20. Some species are almost extinct

Many species of macaw are endangered, especially those in the wild. There are 17 species of macaw, and almost half of them are very low in numbers. Much of this comes from illegal poaching and the pet trade.

Make sure that your macaw has been sourced ethically.

Take good care of your Macaw, and perhaps consider getting macaws that can’t exist in the wild, such as ones that have been injured!

19. Their beaks are some of the strongest of all birds

Macaws have extremely strong beaks in order to crack nuts and other shelled foods, such as coconut.

Be careful when petting a macaw that doesn’t know you, especially if the owner isn’t around. You do not want to get bitten by that powerful beak!

18. Their eye color can change

The color of a macaw’s eyes changes over their lifetime. They start a dark gray or black and gain color as the macaw gets older. They turn to a brownish color that slowly becomes yellow as they age.

This takes a long time, as macaws have a long lifespan, but pay attention to the way your macaw’s eyes develop over time, it can be a beautiful sight to behold!

17. They love to play games

The macaw is a playful bird. They love branches and toys to play with, and become very attached to their owners and seek regular affection.

Don’t purchase a macaw if you think it’s a low maintenance pet! They need love just like a cat or dog.

Avoid feeding these foods and other harmful substances to your macaw so it can stay healthy and happy! Knowing your macaw’s diet is absolutely crucial for being a responsible bird owner.

Macaws live for about 40-60 years, with different species of macaws having different lifespans.

Over that extended period, the macaw becomes very attached to its owner, learns many tricks, and is an affectionate and exciting pet. This bird is a long term commitment, so take care of it!

The oldest macaw ever recorded lived to a whopping 112 years old. Talk about an old bird!

Macaws are very intelligent. It’s been studied that they have the same level of intelligence as a human toddler or child from four to eight years old.

They can do simple problem solving and They can even learn to unlatch their cage and escape!

This can make them a great pet to play with and interact with, but be careful your macaw doesn’t break free and fly away.

13. The love to perform tricks

Macaws can perform many tricks, including the classic parrot trick of mimicking the words you speak or the sounds you make. Have some fun and spend some time with your macaw by teaching it some tricks it can do.

12. The love to learn new things

You can show them off to your friends and engage their brains at the same time. This behavior comes from how playful and intelligent they are. Make sure to consistently engage with your macaw to keep it sharp and active!

11. They need toys of occupy their beaks

Macaws love to use their beaks. Make sure they have toys, twigs, or anything else they can play within their beaks, or else they’ll start taking their beautiful feathers off!

They love wooden toys and items especially, so leave some of these in the cage to keep them occupied.

10. They love to throw things

If your macaw gets bored or lonely, it might start throwing things out of its cage. This can include nuts, small fruit, pellets, and any other items that can fit between the cracks in the cage.

Keeping your macaw preoccupied with food and play can avoid this sometimes, but it will inevitably happen. Don’t purchase a macaw if you’re against cleaning up the area around its cage!

9. They can be very bossy

Your macaw will try to dominate the space it lives in. Make sure it knows you’re in charge with proper, loving discipline, dominant behavior, and confidence.

This will take time and patience, but it is essential for ensuring your ability to have a quiet and peaceful home while your macaw lives a happy and healthy life.

8. They can be allergic to fumes

Macaws are allergic to the fumes from air fresheners. Try not to use air fresheners to combat the smell that might come from your macaw’s cage. A subtle candle or incense would be healthier for the bird to help combat that pet cage smell.

They are also allergic to the fumes that come from cooking with non-stick pans.

Make sure that your macaw cage is either far away from the kitchen, or that you don’t use the kind of pots and pans that might produce fumes that are harmful to your macaw.

7. They need a lot of space

Macaws require regular care! Just like other pets, they need to be bathed and groomed regularly to keep them happy and healthy, as well as keeping their feathers colorful and bright.

Use lukewarm water to bathe the bird, trim its beak and talons. Any pet store will sell the materials for grooming your macaw.

6. No two macaws are the same

Every macaw is different. No two have the same pattern of feathers on their face. When you buy a macaw, you can be sure it’s yours and there’s no other macaw in the world that looks just like yours!

Think of it almost like a human fingerprint or a snowflake, no two are quite alike.

5. Hybrid macaws are being breed

With all the different breeds of macaw, it is actually possible to breed hybrids!

These extremely unique birds are the result of different species of macaws mating, and these special birds are very bold and colorful.

Macaws are extremely social animals. In the wild, they can be found in flocks of around thirty birds!

This can’t be replicated at home, but make sure they are getting enough attention to keep them happy. Perhaps you have other pets they can interact with.

Be careful with this, however, as macaws can be dominant or territorial.

Macaws can fly at speeds up to 40 miles per hour! In the wild, they love to scout for food and can fly up to 15 miles a day in search of food for the family.

They’ve been seen to go on long morning flights in search of food in the wild, but in your home, they will be fed comfortably and well taken care of so they don’t have to do this chore.

2. They are extremely loud

Macaws use loud screams and squawks to communicate with other macaws and humans. If your macaw is being extra loud, it might need something! Pay attention to this behavior.

It is for the best it ends quickly not only for yourself but for the health and safety of your macaw as well!

1. The can chew just about anything

Macaws love to chew things, so be careful when you let them out into your house!

They might chew up whatever they can get their beak around. Imagine if that misbehaved dog that chews up the couch pillows could fly. Be careful when you let your parrot out!

The macaw parrot is a beautiful, playful, interesting, and all-around fantastic pet. It is a species that deserves to be taken care of well and preserved.

Knowing the proper diet and lifestyle for your macaw is essential to keeping it happy.

Overall, remember that your macaw is a social animal that needs love and affection, is an animal with a very particular diet, and loves to play and problem solve.

A macaw is not a decorative piece, it is a pet as involved as a dog, cat, or other more conventional animals that people have domesticated.

Hopefully, these facts have enlightened you to the beauty of this endangered animal, and if you’re an owner, have helped you know better about how to take good care of your macaw! Do Owls Make Good Pets ( Can you legally own one?)