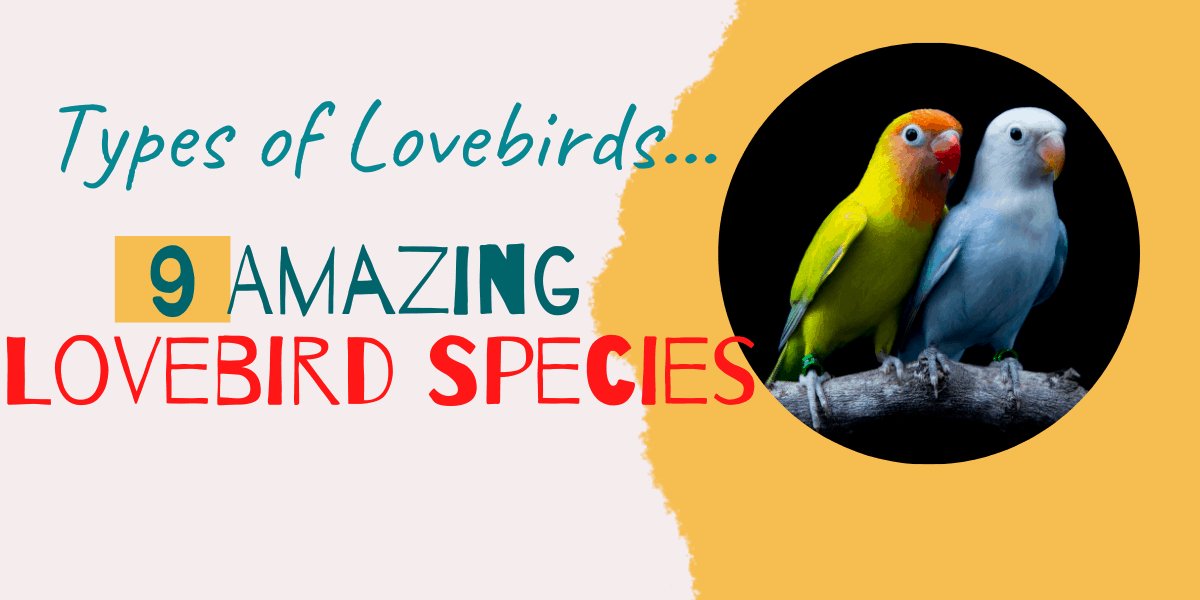 Lovebirds are often referred to as pocket-sized parrots and their vibrant colors, sociable natures, and reputation for being great companions means that Lovebirds are one of the world’s most popular small birds to keep as a pet.

If you are looking to get your own lovebird as a pet then you might wonder how many types of Lovebirds are there?

Before looking into the different species, we’ll first cover some of the similar characteristics that you’ll find Lovebirds to have, regardless of their species.

The first characteristic that all Lovebirds share is their size. They are widely referred to as “pocket parrots” as a result of their small size (and as a result of being a part of the parrot family Psittaculidae) with most being 5 – 7 inches in height.

In terms of physical characteristics, they have a short, stocky build, short blunt tails, and a sharp beak. Their colors are often a key indicator of their breed (despite the fact that breeding has led to new color mutations for most of the species) and for that reason, we will cover this in more detail shortly.

Another characteristic that all Lovebirds have in common is their Zygodactyl feet. This is where two toes point forward and two toes point backward which allows these small birds to keep their balance and hold on to small items when perching.

There are 9 different species of Lovebird in total. As mentioned earlier, the first three are the most common Lovebirds and are often kept as pets, the next six are considered to be rarer species and are wild flocks that are rarely kept in captivity for breeding or as pets.

Below we will give a brief overview of each species and point out their more defining characteristics.

The Peach-faced Lovebird, parent species to the equally popular Rosy-faced Lovebird subspecies, is the most common and popular lovebird when it comes to breeding and pets.

As a result of their popularity with breeders, there are countless mutations and Peach-faced Lovebirds can come in a wide variety of colors.

The most common type of Peach-faced Lovebird (excluding breeding mutations) is easily distinguished by its dark green plumage and peach colored face and neck.

These birds can be easy to tame which is why they are a popular choice for pets but they can also be aggressive, especially towards other birds/pets.

The Fischer’s Lovebird is another very popular pet as a result of their playful and social nature whilst also being very energetic but also much quieter than most other breeds of parrot or lovebird.

Fischer’s Lovebirds can be distinguished by their dark green plumage, a yellow neck that gradually becomes a dark orange/red on their face with a dark olive green on top of their head.

They are also a smaller breed of lovebird at 5 – 6 inches tall on average and can live as long as 15 – 20 years in captivity.

The Yellow-collared Lovebird, more commonly known as the Black-masked Lovebird, draws its separate names from the fact that they carry two distinct features (unlike most other species which have one feature from which their name originates).

These birds have a green plumage, though a common light blue plumage also emerged in the wild and was then imported for breeding, with a bright yellow neck (from which the Yellow-collared name originates).

They do, however, also have a very distinctive black face which is why they are also referred to as Masked Lovebirds.

This is the final species of lovebird which is commonly kept as pets and these are a very social species that do not cope well with isolation. They either need plenty of human contact or a lifelong mate for companionship.

The Lilian’s Lovebird, also known as the Nyasa Lovebird is one of the rarest and least studied of all the lovebird species. Not only are they quite difficult to breed but they are on the near-threatened list and have a very small total population.

Lilian’s Lovebirds are characterized by a light green plumage with a bright orange neck, head, and face. As a result of their rarity, there are very few color mutations with this breed so they can often be much easier to identify.

The Grey-headed Lovebird is also commonly known as the Madagascar Lovebird and is the only species of lovebird to originate from outside of Africa. These birds are native to the Madagascan Island off the coast of Africa and some can also be found on neighboring islands.

The males can be characterized by green plumage with a darker green back and wings, and a light grey or white head and neck. Females are entirely green with no particular color variants of note.

The Black-cheeked Lovebird is the most endangered species of lovebird due to their small area of population and a strong reliance on large surface water areas (which has seen a decrease in African areas over the years).

These birds were initially thought to be a subspecies of Lillian’s Lovebird species though they are now considered to be their own individual species. They have a slightly dark green plumage, a dark brown/black head, and cheeks with a dark yellow throat.

The Red-headed Lovebird is notoriously difficult to breed in captivity as a result of their stressful nature and a strong reliance on native conditions.

The males can be distinguished by their green plumage with a red face, head, and beak. The females are similar in terms of plumage, however, their cheeks, face, and beak are a lighter orange color instead of the red found on males.

The Black-winged Lovebird, also known as the Abyssinian Lovebird, is a very rare species that has only recently seen an attempt to hold them in captivity for breeding.

They are typically larger than other lovebird species at 6 – 7 inches in height and weigh around 48g on average.

The males have a green plumage with a black underwing and red forehead whereas the females are typically green all over without the distinguising black or red features.

These birds mainly have a green plumage all over though they can be easily distinguished by the black collar around the nape of the neck (back of the neck). This is the only noticeable marking on this species and there are no separate subspecies with different mutations to their color either.

While we mentioned that the first three species are the most common to keep as pets and the remaining six are rarer species, there is also a further way to categorize each species based on certain characteristics.

Lovebirds are amazing pets, they are colorful and vibrant, sociable creatures that provide entertainment while playing, and most importantly, they thrive on companionship and affection with their owner.

While we’ve covered the different species of lovebird above, it’s worth keeping in mind that only three are suitable for survival in captivity. From the species suitable for pets, there are countless subspecies so It’s worth checking your breed before looking to get one as a pet to ensure they are suitable for captivity. Can You Take a Pet Rabbit Outside for a Walk?

Can Rabbits Eat Newspaper? (Why or Why Not?)