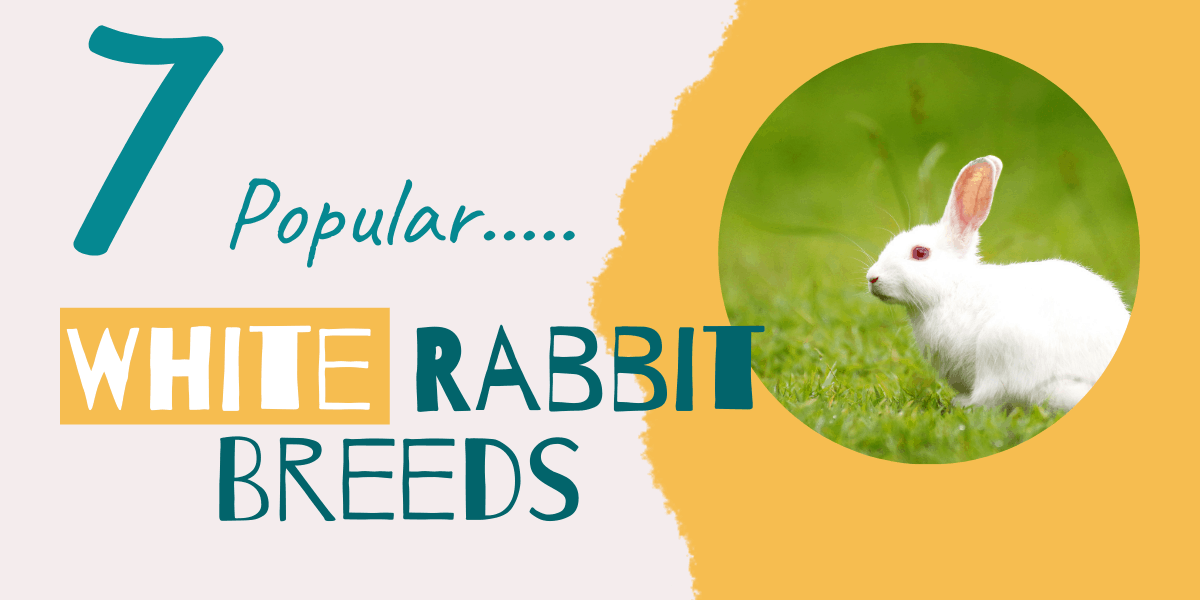 When I think of cute pet rabbits I think of little furry white rabbits. You know the sort. The ones that feature in every easter bunny picture ever taken or childrens story. Right?

Well, thankfully there are many different species of White Rabbit Breeds to choose from.

So, let’s take a look at the most most popular white rabbit breeds to keep as pets.

They have an albino gene that causes them to have ruby pink eyes and pure white fur. Other New Zealand Rabbit colors include blue, broken, red, and black.

Due to their intelligent and friendly natures, New Zealand White rabbits came to be used not just for food, but as companions – and they’re fairly popular.

They have plump haunches and big ol’ ears, they’re smart, they’re playful… and you can sink your hands into their thick, luxurious fur. In a pet rabbit, what more could you ask?

The Florida white rabbit is a relatively small rabbit, at just 4-5 pounds. These little guys were first bred for laboratories, and are sadly still used there today. Fortunately, thanks to their intelligence and friendliness, many meet a kinder fate, because as pets, they have become fairly sought-after.

This is thanks not only to the breed’s lovable personality, but also their appearance: classic red-pink albino eyes and pretty, and snowy white, super-soft fur. Their bodies are more rounded than other breeds, giving them an especially cute look.

As pets, Florida White Rabbits are both docile, and healthy, making them one of the easiest white pet rabbit breeds you can care for. They’re playful, affectionate, and well-mannered, and they make really wonderful pets for the right folk.

The Blanc De Hotot is yet another rabbit that was first bred for meat and fur; it’s white fur resulted in lighter meat and furs that, compared to brown, tan, or gray, were much rarer.

This rabbit’s name comes from its origin, as it was first bred in Hotot-en-Auge, located in Normandy, France; this, by Eugenie Bernhard, a renowned rabbit breeder.

The Blanc De Hotot is actually a White Flemish Giant, Checkered Giant, and White Vienna mix. It was the early 1900s when these were bred together. The result was a large white rabbit with distinctive black eyelashes and ‘eyeliner.’

Blanc De Hotot Rabbits are quite gorgeous, with white, silver-frosted fur. They are bigger than your average rabbit, thanks to their Flemish Giant and Checkered Giant ancestor.

Their temperaments also take after Flemish Giants, as, compared to smaller breeds, Balance De Hotots tend to be rather friendlier and braver.

True to their name, these enormous rabbits can reach up to 3 feet long, and weigh a whopping 10-22 pounds (wow!). Like the White New Zealand Rabbit, the White Flemish Giant was also originally bred for meat, but due to their intelligence, docility, and curiosity, they also became pets – in fact, they are highly sought-after.

Flemish Giants are perhaps the calmest rabbit breed there is, and not prone to panicking, fighting, etc. They get along with new people, children, and other pets (even large dogs).

White Flemish Giants have a long lifespan of over 8 years on average.

That being said, you do not want to pick them up… this is the exception, and they will panic and deliver a powerful – and potentially painful – kick! A drop can also seriously hurt their back.

Instead, it is by far the safest to pet them on the couch – if they hop up on their own – or the floor.

The downside? White Flemish Giant Rabbits eat heaps of hay – almost as much as a small pony!

Hay, such as Timothy Hay, is their main diet staple and should be available to these giant rabbits day and night, 24/7. Many will buy hay for their White Flemish Giant Rabbit in bales (believe it or not!).

Read more here on their diet and care needs.

The Netherland Dwarf Rabbit is another breed in which albino – white – variations can occur. These adorable, guinea pig-sized rabbits are fluffy and snowy-white, with distinctive albino ruby pink eyes, and ears that are shorter than other rabbits’ (similar to a teddy bear). They are very timid, but very affectionate if they feel safe where they live.

This means a quiet environment, without predatory pets, and consistently gentle and soft-spoken behavior. Show your White Dwarf Rabbit consideration and patience, and they will reward you with fondness that in time, will transform into love (it’s all about gaining their trust – and keeping it).

As far as rabbit breeds go, Netherland Dwarf Rabbits are some of the livelier. They appreciate lots of toys, and non-toxic wood to chew. They are fun to watch frolic about, and in a safe and fun home, they really couldn’t be happier.

The Himalayan Rabbit is a plush white rabbit with black ‘points,’ on their ears, nose, paws, and tail (much like a Siamese cat). This gives them an exotic and downright gorgeous look.

As a type of albino, Himalayan Rabbits also have ruby-pink eyes that stand out prettily against their cotton-white fur. The black points are uniquely temperature-sensitive (also like a Siamese cat), appearing on their outer extremities (which get the coldest), and they prefer dry, moderately-warm weather.

Himalayan Rabbits are known to get along well with children, as they are some of the calmest rabbits there are!

Like any good pet rabbit, they are also intelligent and friendly; the playful behavior and lovely, adorable appearance of this white rabbit breed is sure to win you over.

White Lionhead Rabbit is, in a word, fluffy! You can tell that this little bunny is related to the Angora (which is literally bred for its hypoallergenic wool). White Lionhead Rabbits often have an off-white or gray tint, and some have black faces, paws, ears, and tails (much like a black sheep).

This rabbit is not actually recommended for the beginner. This is because they tend to be one of the more timid rabbit breeds, which can lead them to fearful or even aggressive behavior. They require someone with a quiet, peaceful home, and plenty of patience and affection to offer.

White Lionhead Rabbits also need plenty of exercise – of all of the rabbit breeds, they are one of the livelier. They will need big cages, and to be let out of their cage at least once a day!

Like all rabbits, White Lionheads must also have plenty of toys to play with, as well as a woodblock or two to chew. The latter will help keep the length of their ever-growing teeth in check.

The vast majority of pet rabbits that are available in most pet stores need very similar care routeens. They all need a suitable home with plenty of space to hop and jump and toys to keep them entertained.

Their diets can vary slightly but this is normally due to the size of the rabbit and not their color.

One of the main points you should look for when keeping a pet rabbit is their personality. This can play a bigger part in keeping a happy pet bunny than you can ever know.

White rabbits need just as much attention as other breeds like pure all-black rabbits.

It’s their personality that will win you over in the end. Sometimes the cutest pet bunnies are not always the most fun. Also remember not all breeds of rabbits get alone and that includes all white rabbits.

White rabbit breeds will need extra care and attention to their fur. It will need regular brushes and maintenance to keep it clean and most of all, healthy.

As you can see from the 7 White Rabbit Breeds we have Featured above, there are certainly some cute and adorable white rabbit breeds to choose from. I cannot deny that.

But ask yourself, is white your color? Some Black and even brown rabbits look cute and are just as playful and cute as these white ones. Have, you seen a lionhead rabbit? Or a Brown Lop rabbit? They are simply stunning and very playful and cute. And they are not white!