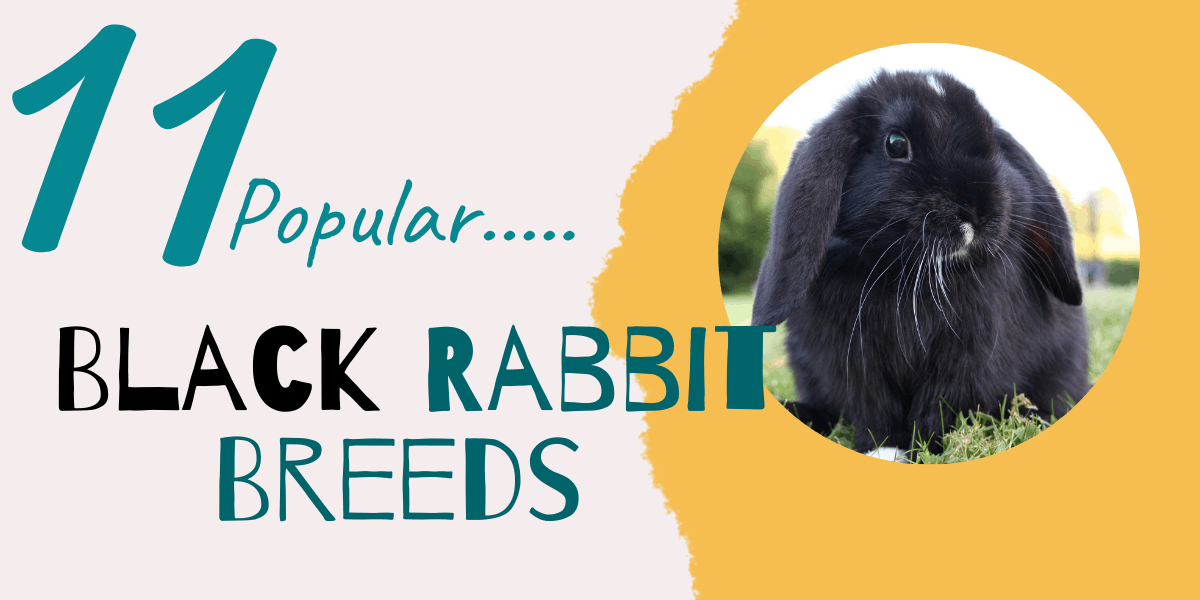 Buying a new pet rabbit is so much fun. Looking at all those cute and fluffy bunnies and hoping to spot one that attracts your attention.

Well, the color of the pet rabbit plays a big part in that process. Sadly, Brown and Grey rabbits often lose out to Jet Black bunnies and Pure white ones.

Today we take a look at 11 of the most beautiful black rabbits of all different sizes and colors.

Let’s see if we can find the perfect new bunny for you and your family.

The Black Flemish Giant rabbit lives up to its name, with an inky-black coat and a truly enormous size: 3 and ½ feet in length, or more. Their ears are big and floppy, and their coats are luxurious and thick.

Black Flemish Giant Rabbits also sometimes have what are called guard hairs – outer hairs on their coat – which are a lovely, frosty silver. The result is an extraordinary big rabbit with an equally extraordinary look.

Black Flemish Giant Rabbits are also known for their exceptionally calm natures (most rabbits tend to be at least a bit timid), and they get along with new people, children, and even dogs, other rabbits, cats, etc. – perhaps their size makes them braver.

They typically live about 5 years, and they will need lots of room to roam, and literal bales of hay… and you will almost certainly want to train them to use a litter-box!

At only 1.1 to 2.5 pounds, you can see where the Netherland Dwarf Rabbit got the title ‘Dwarf.’ They were first bred in the Netherlands, and came to be very popular.

These little rabbits can be found all around the world now! This tiny breed actually has a longer lifespan than most, anywhere from 7-12 years (while many rabbits live 5-9).

Black Netherland Dwarf Rabbits are small, round, and compact, with shorter and more rounded ears than most rabbits have – similar to a little teddy bear. The black varieties sometimes have white bellies and chins and range anywhere from dark gray to an inky, velvety black.

Black Netherland Dwarf Rabbits tend to be a bit wild naturally, and take a bit more time to warm up to people than other rabbits might (like the Flemish, for example).

Have you ever seen an English Lop Rabbit? These are the big guys with floppy ears down to the floor. Some call the Black English Lop Rabbit the dog of the rabbit world, due to its curious and friendly nature – though, this up to 12-pound rabbit is generally much lazier.

Black English Lop Rabbits reach their full, mature size at about 5 months of age, but their ears will continue to grow for much longer. They have big, doe-like eyes, teardrop-shaped faces, and calm, sweet expressions that have captured many a photographer.

Black English Lop Rabbits have soft, almost silky fur, and their ears truly are comparable to silk. The only downside of these floppy ears is that they can easily become dirty from always dragging on the floor.

Their ears will need to be swabbed gently clean (but no rabbit should ever be bathed fully or allowed to soak).

The Havana Rabbit comes in lilac, blue, broken, brown, and of course, black! This breed was actually named for its, rich, dark color, which was thought to resemble a Cuban cigar.

The Black Havana Rabbit has short, soft, easy-to-maintain ultra-dark brown-black fur. All that this breed requires grooming-wise is a going-over with a slicker brush roughly once a week.

As far as rabbits go, Black Havana Rabbits are some of the calmer. They don’t require as much activity or playtime as, say, a Flemish Giant, Lionhead, or Netherland Dwarf. They should still be allowed out of their cage at least a few times a week to stretch their legs and get some good hops in, however.

Black Satin Rabbits have bright, inquisitive eyes, and their ears stand straight and full (much like narrow, bowled-out leaves). They are named for their short, ultra-silky, super-shiny fur. Black Satin Rabbits are colored like black velvet or black ink.

Like most rabbits, the Black Satin Rabbit should be let out of their cage for a few hours every day! They will also appreciate the opportunity to go outside in the (fenced) backyard, to feel the grass on their furry feet, and get some fresh air.

As far as grooming, the Black Satin Rabbit only requires a going-over with a slicker brush about once a week. It will be required more often – say, three times a week or more – during the brief, heavy shedding times of the year.

The Black Polish Rabbit is, in a word, round! This rabbit breed has a round, compact body, and a rounded face, as well.

Compared to most other rabbit breeds, Black Polish Rabbits’ ears are also more rounded, and quite a bit (about an in or two) shorter.

The Black Polish Rabbit is known to love attention, can enjoy being held – unlike most rabbits – and has been affectionately called a cuddler. This is a docile pet with a personality as soft as its plush, shadow-black fur.

Black Polish Rabbits tend to be a bit easier to train compared to larger rabbit breeds, which is why musicians have often used White Polish Rabbits in their shows, etc.

For those who are not magicians, what this means for you is that you may have an easier time teaching a Black Polish Rabbit to use the litter box!

Personality-wise, the Black American Fuzzy Lop rabbit is much like the Holland Rabbit: sociable, affectionate, and playful – what more could you ask?

The Black French Angora Rabbit – or an Angora in any color, really – is one rabbit that, in the future, you’re sure to remember. This outstanding rabbit has extremely long, fluffy, soft fur, which is referred to as ‘wool.’

This can be sheared (properly and very gently). The wool that French Angoras produce is hypoallergenic, so the clothes, blankets, etc. made from it can be an alternative to those with allergies to sheep wool.

Black French Angora Rabbits often gray bodies, while their heads and feet are black. They may also have a tuft of gray on each ear.

French Angora Rabbits should never be bathed, as this will can all-too-easily cause any breed or rabbit to experience deadly hypothermia and shock. They are hygienic and do not require much grooming besides a brush or some spot-cleaning with a slightly damp rag, once or twice a week.

Black French Angora Rabbits are quite playful, and fun to watch hop around with all of that fluff.

All-black Lionhead Rabbits are black as a void, all over. Along with their manes, the bold color gives these little rabbits a truly, adorably lion-like look!

In actuality, most Lionhead Rabbits are very timid and can even become aggressive out of fear. They need a calm and quiet environment in order to relax. When they feel safe, Black Lionhead Rabbits’ friendly personalities and curious natures can really begin to show!

New Zealand Rabbits are big rabbits – between 9-12 pounds – that come in a few recognized colorations: white (albino) red, broken, and black. They were originally bred solely for their dense meat and thick fur.

They have since become popular as pets, as well, however. Black New Zealand Rabbits are intelligent, docile, and friendly, with classic stand-up ears and ‘rabbit soft’ fur. They have round, plush bodies, with coats of deep, inky-black. These are rabbits of an exceptionally beautiful breed and color.

The Black Rex Rabbit breed includes the ‘Black Otter’ Rex. These are Rexes with cream-colored undersides, with cream around their eyes, and heads and backs that are entirely black.

Where the black and cream fur meets, there is a tan border. There are also Black Rex Rabbits with coats that are all-black.

The result? Gorgeous rabbits, with equally sweet dispositions, that have become quite popular. All Rex rabbits tend to be a bit paternal, and are very loyal. The does are known to act motherly, in particular (grooming you, guarding you – until they become too frightened of the perceived danger).

All Rex rabbits have fairly low-maintenance coats, though they can benefit from a brushing about once a week. Caring for one of these gentle, good-natured, and hygienic rabbits couldn’t be easier.

As you can see there are many beautiful and cute Black Pet rabbits to choose from. Some are more popular than other and Black Rabbit in my eyes can certainly give white pet rabbits a run for their money in the cute looks competition.

Some of these black rabbits can grow very big and need a lot of care and special dietary requirements. So, please ensure you seek more advice from your breeder or local pet store before purchasing one.

Can You Have a Raven as a Pet? 7 Things to Consider